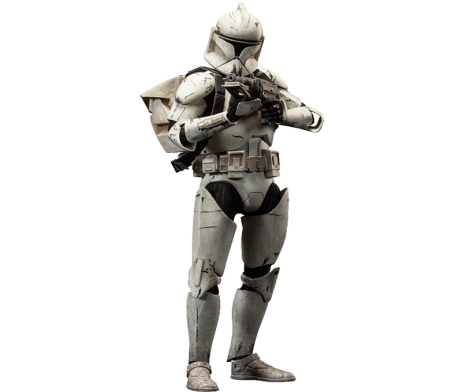 „Well-established maker of „King of high-end”, sideshow to give it, „Star Wars” 1/6 scale figure series. 104 as the second step, clone troopers (veteran version) lineup from category of [military’s of Star Wars]. Figure 30 places or more movable Height approx 30 centimeters, are three-dimensional charm to the maximum of clone troopers of veteran who appears in „Star Wars” series. Armor is a feature of the clone trooper, state reproduce the wounded veteran only having experienced the battlefield of many. Backpack of clone troopers only have come as an accessory. The helmet comes with two types, The first helmet appeared at „attack of Episode 2 / clone” of „Phase 1″. The second has a helmet at the time, „Revenge of the episode 3 / cis” and „Phase 2″. Other Droid Popper to stop the movement DC-15A blaster rifle and DC-15S blaster carbine, the Droid is a standard firearms (EMP grenade), weapon comes with Z-6 rotary blaster cannon. You can use the rich hand for replacement parts, scene directing a variety of fun. In combination clone troopers that was co-published „rookie version” „501st Battalion edition” and „# 212 Battalion” version, it’s possible to organize the clone troops active in stage variety! ”